Embark Studios continued to support my work throughout January.

They have been supporting all kinds of open source Rust contributors this past year and are a huge boon to the Rust community. I'm exited to work with them to bring more Clippy features on the way!

I also want to thank the following people for continued sponsorship of my open source work this past month: @repi, @oli-obk and @yaahc.

If you like what I'm doing and want to support my work as well, please consider sponsoring me on Patreon or via other means 🧡

What I've worked on

7 contributions got merged this month:

In addition to that I currently have two open pull requests in compiletest-rs:

Finally, I started a new Rust side project: webdriver-install. As the name suggests it manages the installation, updating and removal of webdrivers, such as chromedriver.

Currently it supports the installation of chromedriver and geckodriver on Windows, MacOS and Linux. It comes both as a Rust library as well as a CLI for usage in non-Rust environments. 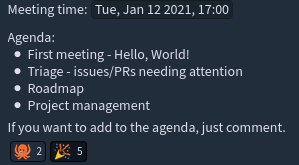 I believe this is going to be great for long-term contributor retention and finding more team members. The bi-weekly meetings may also improve my personal motivation to get things done.

As mentioned in my previous post, I'm now back in the reviewer rotation for Clippy. To be honest, I don't have a good system for managing review notifications, yet. So far I only decided that I will take a month off from reviewing and open source once every year.

One thing that didn't go so well, is the implementation of the internal cargo dev bless command that I rewrote in Rust in December. I came to the conclusion that the way I implemented it was not the best way. The details can be found in this comment. Instead of keeping the current implementation, I am helping out with implementing it the proper way in compiletest-rs.